As with Galaxy Ascendant book 3, A Shifting Alliance, both of these were written on my IDF base (on a laptop, primarily, rather than a phone this time)—and a bit while deployed near Gaza a few months back. Nothing could stop the Galaxy Ascendant, and I hope you can help me keep the ship on course!

We have updated galaxy maps for each book to accurately reflect the shifting military situation, plus two more beautiful cover arts by John Zeleznik which go very nicely together.

In addition to the story more generally widening, we, in these two books, get to spend time with two new viewpoint characters (who have each appeared in some capacity before in smaller roles), and the journeys of many characters enter their most difficult chapters.

Check out the link below for the campaign itself, which includes a trailer I’m really proud of (some spoilers for previous books, but if that’s not an issue for you definitely watch it), plus tons more info and a wide variety of reward perks. From just ebooks, to print books, to creating characters, and, new for this campaign, helping to create/design ships in the Galaxy Ascendant and, for those who really want to make an impact, you can commission a Galaxy Ascendant short story of your own! More details for all of these on the campaign page itself.

Helping the campaign out ensures I can pay my artists, editor, and formatters on time, and will greatly help me keep up the pace and meet my goal of getting books 6 & 7 written by year’s end and released early next year, to conclude the series—and open up the Galaxy Ascendant for even more stories to come!

The war has taken a drastic turn, and now the small Tyrannodon Alliance finds itself surrounded, outnumbered, and outgunned. High Executor Darkclaw, with Grand Admiral Nayasar Khariah at his side, must find a way to not only ensure the survival of their respective people, but also to ensure that their enemies are defeated, once and for all.

Meanwhile, over in Imperial space, the rebel victory at the Imperial superweapon, Final Awakening, seems almost inconsequential as, cut off from any allies able to help, they must struggle to survive an Imperial noose being tightened by the legendary, brilliant, and mysterious Grand Admiral Sai’var.

The Galaxy Ascendant series enters its most explosive chapter yet! 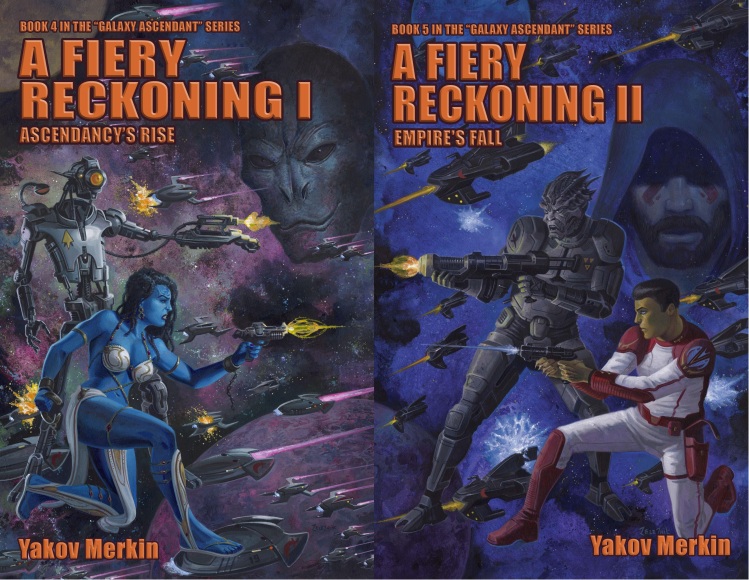