Historical statues and monuments have been the subject of much discussion in recent months, even more so over the past couple of weeks. They have also been the subject of much action, with at least one Confederate statue being torn down by a mob, a 200 year old Christopher Columbus monument being vandalized with a sledgehammer, and a bust of Abraham Lincoln was torched. Beyond that, officials in some areas have had Confederate statues removed–usually under the cover of darkness.

So much has been said about this already, on both sides of the debate on the issue of Confederate (and other) monuments, so I’m not even going to touch on the issues with specific monuments or statues. Just my opinions on the larger issue.

There is only one situation in which I can understand statues or monuments being demolished (or moved.) That being, following an occupation of a foreign power or the overthrow of an oppressive regime. On one level I still don’t like that, but people in those situations cannot be faulted for taking out anger on symbols of an oppressor. However, there are ways to avoid destruction of monuments while still reasserting a national identity in those cases. For that, I am reminded of my trip to Budapest. There is an entire park near the edge of the city where the communist era statues were moved. That demonstrated the reclamation of Hungary, but also preserved the history for locals and tourists alike.

Now, while I’m sure someone, somewhere, has proposed a similar solution for the Confederate statues in the United States, that approach will not work, for two main reasons.

First, the Civil War took place over 150 years ago. No one today was ever oppressed by the Confederacy or slavery–if they claim they are, they’re delusional. Second, unlike those erected by an occupying power, these statues were put up by Americans, with the permission of the authorities in the areas they were placed.

No historical figure is perfect, especially by our moral and ethical standards today. And we are seeing, just as President Trump predicted, that this statue madness is not going to stop at Confederates. Already, Columbus monuments and statues have been targeted, as have those of Thomas Jefferson and even George Washington. Make no mistake; the perpetually offended will come for more and more, because they want to sanitize history. It’s been happening in textbooks already, but that’s been more out of sight. Now, for both better and for worse, it’s all out in the open.

It’s really not a complicated matter. Yes, historical figures are not perfect ,especially by modern standards. But no one is claiming they are. But they’re still our past, and the monuments to important people serve as reminders of that past, both good and bad. People commonly warn against repeating history. These statues and monuments are a crucial tool in the learning process. To learn about the founders of a country by reading a book is one thing, but to go and see their statues helps to really grasp the impact they had on the world. And in the case of Confederate generals, we also gain perspective on them despite the fact that they fought on the side of those who supported slavery. That was far from all they did, however, After being pardoned at the end of the war, many of these same men went on to serve the United States, or made other worthy contributions to society. Should their association with a negative thing become the totality of their legacy? No.

Forgive me for defaulting again to Hungary, an area in which I have no small amount of knowledge. There was a major controversy, a couple of years back, when a bust of Admiral Miklos Horthy, who served as regent for a quarter century, was dedicated in front of a Church near Liberty Square in Budapest. In addition to protests, the statue was quickly vandalized, and now sits under a protective glass case. Horthy is at least as controversial there as the Confederates are in the United States, and part of what I discussed in my recently published Master’s thesis is whether or not he is worthy of a statue. To sum up a very complicated topic, there is no simple answer. Horthy was by no means a perfect man, and there is a case to be made against it. All the same, however, he is one of the most important figures in the history of 20th century Hungary, and charted the course of the country for a quarter century. The fact that his name is still brought up in debates today is evidence of that. Therefore, in my personal opinion (as separate from my objective look at the history), he absolutely deserves to be remembered, and I was pleased to see more monuments to him in his hometown of Kenderes.

Statues do not hurt anybody, and anyone who claims that a statue makes them feel unsafe or something like that, should, frankly, seek professional help. I don’t need to share the side-by-side comparisons of ISIS smashing statues and an alt-left mob doing the same, do I?

Removing statues will not change what actually happened, and will only lead to more forgetting the lessons of the past, because by this logic, everything historical must come down, from Robert E. Lee statues to statues of Horatio Nelson, to busts of Miklos Horthy, to the Arch of Titus (which was built specifically to celebrate the subjugation and mass murder of my own people.) I do not want to live in that world, however, and I will add that any person who calls themselves a historian or a lover of history, but supports this awful sanitization of history, is a hypocrite of the highest order (and I mention this because I have personally seen this online.)

To those on the right in the United States and elsewhere: Keep fighting for your monuments, every single one of them. They want to erase your history, and sacrificing a few monuments won’t satisfy them. It’s the playbook of the radical left, and we have seen this happen in the past when a nation has been conquered,  whether by force or by ideology. Do not let the United States become a part of that statistic. 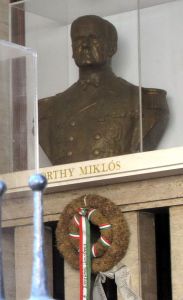