I’d like to share an excellent post by Brian Niemeier, which itself is sharing and replying to another great article by Daddy Warpig over on the Castalia House blog. The gist of the longer article is encapsulated in Brian’s post.

As Brian points out, the science fiction genre has fallen from being one of the most popular genres, to the worst selling. As those involved in the #PulpRevolution have pointed out time and again, this is in large part due to the focus coming off fun and into “literary elements,” such as pushing messages and a desire to be “scientifically accurate.” Another aspect of this literary swing is an over-emphasis on flowery prose.

It’s boring. That’s all boring. As others have pointed out in discussions online, this is part of the reason why the length of fantasy books in particular have ballooned to arguably excessive levels. Now, that’s not to say very long books cannot be great and fun. Brandon Sanderson’s Stormlight Archive series is great thus far, and they’re thousand page mammoths. But, as some have noted (usually in criticism of him), he has a very straightforward, “pedestrian” prose most of the time. That’s because he wants to tell great stories, and doesn’t waste time on superficial things like that. On the other hand, we have writers like George R. R. Martin, whose prose is often highly praised, but his books, especially his latest books, There is so much padding, and the pacing has gotten terrible. And never mind his inability to write consistently, and fans defending him on the basis of him “needing time for his art.”

There was a time where I worried that my prose was too basic, my stories too simple. That time is past. I know I have great stories to tell, and I’ve got enough to do, especially given that in under four months I’ll belong to the army for a year and a half. I, and others involved in the #PulpRevolution are trying to bring readers better, more enjoyable stories, but we’ve got a lot of ground to regain, against opponents that hold far more power. But readers hold the true power.

So, write great stories that will pull readers in, away from not just the less fun “mainstream” books, but even other forms of entertainment.

And, if you need somewhere to start, my debut novel, A Greater Duty, is a good one. Especially with its sequel due out this fall. 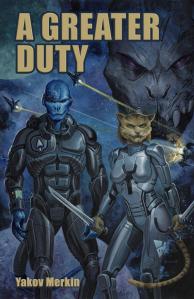