It, of course, comes as no surprise that those opposed to ComicsGate label their ideological opponents as “harassers,” or “bullies,” or other defamatory statements, all with the idea of alleging that we make others feel unsafe, and wish to exclude people of certain groups from industries or events–despite the fact that this couldn’t be further from the truth. We saw this with GamerGate, the Sad Puppies, and everywhere that normal, rational people stood up against the SJWs taking over and destroying industries that many of us are attached to and care about.

The irony, of course, is that these people are the actual bullies and harassers, and, as Jon Del Arroz lists here, we have many examples now of people on the “wrong” side of the political spectrum being either excluded from conventions through false allegations that lead to dis-inviting or banning, and through threats of violence. While, most of the time, such threats of violence are made by cowards on the internet who will never act on, it, we cannot discount the possibility of some crazy person doing so, as happened to Jeremy Hambly of Unsleeved Media and The Quartering.

The latest example of this is the decision of Mitch and Elizabeth Breitweiser, comics creators who recently had an extremely successful crowdfunding campaign for their Red Rooster comic, choosing not to attend the Lakes International Comic Art Festival over concerns about their safety at the event following numerous threats.

That this is the situation is simply unacceptable, and while I understand their decision, each “victory” for our enemies–and make no mistake, that is what they are–will embolden them to do the same again, and again, with the goal of making all of us guilty of “wrongthink,” especially creators working to make a living in these industries, unwelcome at such events. This hurts careers as well as the fans who want to meet their favorite creators.

As of now, the convention organizers seem to be ignoring this, and will not provide for the security of those threatened, or even acknowledge the threats. Whether this is because they want to stay out of controversy, or because they agree with those harassers, I cannot say for certain (though I do have my thoughts).

So, we will have to make a choice. Either do not attend these conventions, and try and arrange meetups some other way (I don’t consider running our own convention a viable option, as even if we can organize it, there is no way to attract new fans to such events, and one “safe” con can’t make up from being forced out of nearly everything else) or attend despite the threats and make preparations.

Such preparations would have to include going in groups, always making sure to watch each others’ backs, and keep our heads on a swivel the whole time. We must also be prepared to defend ourselves should the need arise, and be prepared to endure deranged harassers. (I will not tell any individual how they should go about protecting themselves, as that is one’s own prerogative. It’s no way to enjoy what should be fun events, but we must be present, and visible, to make sure these scumbags do not win.

From a personal perspective, due to the fact that I live in Israel and am currently serving in the Israel Defense Force, I will likely not be attending a great many conventions in the near future, and when I do plan to go somewhere, it will be a significant undertaking. As such, I will not let myself get (directly or indirectly) bullied out of attending anything I choose to. Depending on the situation, I will prepare accordingly.

If I am willing to risk my life for my people and my country (and while the army might not let me ever be in a position to actively do so, that does not change the fact that I am not afraid to do so) in the face of real enemies, who really do want us dead, internet tough guys and SJW weirdos don’t scare me. I’m not a big guy, but I am capable of defending myself should the need arise, and, to paraphrase my old Krav Maga instructor, I never seek out a fight, but should I find myself in a situation where I feel legitimately threatened, the gloves will come off without hesitation, and it will end only when the threat is neutralized. I would rather deal with the consequences of defending myself than let the enemy attack without a response. To quote the same instructor, “In a fight, you will get hurt. The winner is the one whose medical bill the next day is lower.” Do not mistake anything I have written here as a threat of any sort. Anyone who knows me at all knows that I am generally a conflict-averse person, and unless I feel endangered, nothing will happen at all. But there are times when a stand must be made, and it is here and now. I am sure there are many ComicsGate, etc friend out there who agree with me on this.

We are here, SJWs, and no matter what you try, we are not leaving, and we will not be hiding. We only want to create and enjoy awesome content. You don’t have to like it, or like us, but harassment, threats, and actual violence are beyond the pale.

Act like civil, rational, normal people. And if you refuse to do so, be prepared to face the consequences of your actions.

In the Galaxy Ascendant, old hatreds die hard, and threats great and small abound. In A Greater Duty, Grand Admiral Nayasar Khariah will stop at nothing to keep her people safe and exact vengeance against those who have wronged them, despite the odds. And Executor Darkclaw will face down an unkillable evil because it is what must be done. They do not back down in the face of evil, no matter the situation. Come visit the Galaxy Ascendant today; especially those of you disappointed with modern Star Wars. You’ll find the Galaxy Ascendant a much more fun and welcoming place. Excepting the evil energy beings, corrupted warriors, and evil alien civilizations, at least. 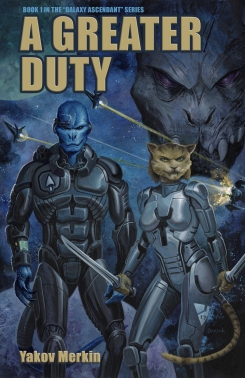 6 thoughts on “The Bully Cries out as he Strikes You”