To the surprise of exactly no one, SFWA (an organization which supports a terrorist organization–you can read more about that here), SFWA is doubling down on its recist policy that gives black authors–and only black authors–free registration to its convention and waiving their membership fees. They first announced this back in June.

The Board of the Science Fiction and Fantasy Writers of America unanimously approves the attached statement in support of the Black Lives Matter movement, & action plan to support the careers of Black writers of science fiction and fantasy. Full statement: https://t.co/fNcC7fgtnp pic.twitter.com/1ugOrgRhDc

And despite the backlash they received, they are still going forward with that planned policy.

Through the rest of the year, we are waiving fees for SFWA membership for Black writers. If you are a Black writer, qualify for, and would like to join the organization or renew your membership, please send an email to office@sfwa.org for more information.

Now, SFWA is an entirely useless organization for serious writers at this point; just skim their twitter feed, it’s mostly just promoting useless (or harmful) “writing advice” or pushing leftist agendas. I don’t really care about this racist policy of theirs (setting aside the potential illegality, why exclude other minority groups? I’m Jewish, should I get free membership? Hell, my grandmother was born in Egypt, which arguably makes me more of African descent than many American blacks), but this is something we should be calling out, in regard to the larger culture war that is being fought now.

And remember, don’t give money to people who hate you. Support authors who fight against this agenda. We write better books too. 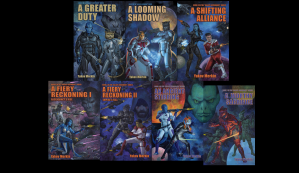